Law of Attraction, It’s All an Inside Job! 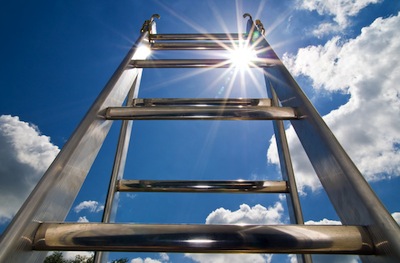 I’ve mentioned to you before that you can’t get where you want to go, from where you are because of the nature of the law of attraction – like attracts like.

Here’s a little personal story to illustrate what I mean:

I regularly look after my nieces’ six year old son. One day we went to a playground that had a climbing frame which included a horizontal ladder going from one side of the frame to the other.

When I suggested he try hand-walking his way over on the horizontal ladder, he said he couldn’t because he was too little. He was right. His hands were too small to grasp the bars and his arms too short to reach the next bar. He couldn’t get to where he wanted to be from where he was.

Some months later, we went back to the same park. He ran straight to the climbing frame and lowered himself down from the top of the ladder.

Now his hands could grip the rungs and he swung his body, using the momentum of the swing to give him extra push so he could reach the next bar. “Auntie Rosie – Look! Look Auntie Rosie I can do it”. He’d got where he wanted to go through growth and change – albeit physical and not emotional.

There are lots of things that are relevant to you in this story.

Firstly, he couldn’t get from where he was to where he wanted to be – and neither can you – because your belief and dream are on two different vibrations.

Secondly: during the months he was growing and changing (physical growth I know) but you need to grow and change too – emotionally.

Thirdly: he used the momentum of his body to move him forward. If you’ve not heard about momentum, it comes when you focus on a particular thought for longer than 68 seconds. Momentum brings your thoughts to life.

Notice what you focus on: notice how you feel and consciously build a positive momentum that will propel you towards your goal faster than you realise – just as my little lad did

He had to grow into being the person who could reach his goal.

Now, I know you’re not particularly interested in growth and that you just want the ‘stuff’ – but growth is the process of life and you’re involved in it! Achieving what you want in life is an internal process of emotional growth and change: always reaching and stretching.

You have to ‘be’come the future-self that is already living the life of your dreams before the law of attraction can deliver.

I know you want the money in the bank or a loving relationship. But we’ve got it the wrong way round: we’re holding of the wrong end of the stick – the physical manifestations are not going to make us happy for long. True happiness comes from within – not without.

I’ve said it before, and I’ll say it again – it’s all an inside job.