The Winter Solstice and January 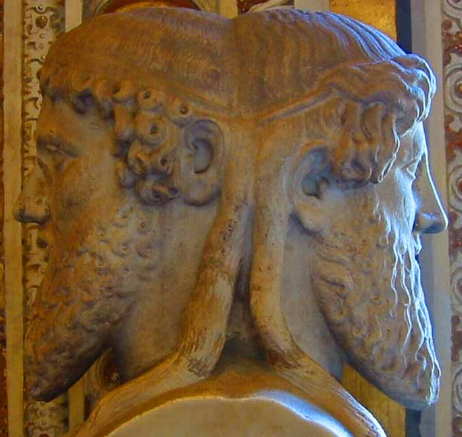 Today is the Winter Solstice, and it heralds a time of change. Although change is the only thing in our lives that’s constant, change isn’t the same for everyone.
In the northern hemisphere, the 21st of December will have the shortest day and the longest night but in the southern hemisphere, it brings the longest day and the shortest night.
It’s the day when the earth hesitates a moment before it does a U turn.

In the hesitation, before the earth does a U turn to start its journey once again towards spring and summer, there’s a hush – a moment that can give us time to look back before we move forward.

In the days of yore, the new year began with the winter solstice, but then one of the popes decided that all the months of the year would be dedicated to Roman Gods and he messed around with the dates so now the new year starts off with January.

January is called after the Roman god Janus. Janus is the god of beginnings; gateways, doorways and passages of time and transitions, and of endings. He is usually depicted as having two faces, since he looks back over the last year and while looking towards the new and uncertain year ahead.

How many people do you know who are complaining about this last year?
So many look back at the year behind them, bemoaning their fate, listing their regrets without giving a thought to the fact that the law of attraction is responding to each of those thoughts.

However, there’ll be some that will celebrate their successes.  Will you be one of them?

And then, we look forward to the future year. We make well-meaning resolutions and hope for the best.

But if we look a little deeper, Janus’ idea has a lot going for it.

Even if you make your resolutions with the best of intentions, they’re going to falter, and often will fall by the wayside because they have no foundation.

If you rush into the new year without evaluating the failures of the last year
you’re only going to trip up and stumble over the same blocks again.

Imagine your life as a ladder and all your “failures” are the rungs. You need to take a serious look at what you’ve learnt from your failures and

stand on that wisdom so you can take a step up to the next rung, so you can see further into the future.

What with the hurry and flurry of Christmas, it’ll probably be difficult to find time to enter the hush on the 21st December, but in your quite moments, when you’re walking the dog or chopping carrots, take time to look back at what you consider are your failures and evaluate what’d do differently next time and you’ll gain the strength and the wisdom you need to take you into the new year.

There is something practical that can help you with the uncertainty of the coming year.
The 30 Day Diary – Laying The Path to Success – can help you gain clarity about what you want, and help you stay motivated all the way through January, and so begin to make your new life a reality.
Have a look, I know it’ll interest you.
Talk to you again next week, as we head for the final curtain of 2018, and into the bright new world of 2019 (who ever would have thought we’d be heading for 2020?  Certainly not me!)