Hello. I’m glad you could drop by for some tea and law of attraction philosophy; what could be better?
Before I talk about expectation, I thought I’d let you a little story. In days of yore, before Rhodesia became Zimbabwe and I used to look good in an airline uniform, I was travelling ‘sub-load’ on a rebated ticket from Salisbury to London, to visit my parents. The London flight was over booked. The Duty Officer sent all the stand-by passengers home as there no seats available for rebated passengers that night. My husband said to me, ‘Let’s go home’. And I told him, he could go if he liked, but I was going to go London that night, and so I would just wait, until at least they had closed the aircraft door. He grumbled and gruttered about women in general and me particularly about how stupid it was to wait and how stubborn I was being.
You know the end of this story, don’t you? Just before the aircraft doors were due to close, the Duty Officer came running to the weigh-bay. He called – ‘pick up your suitcase and run. Quickly, up the front stairs. We’ll stow your luggage in the cabin. Go now!’ We were on! And my husband said to me, as he had done many time before and since that occasion – ‘How do you do that?’! 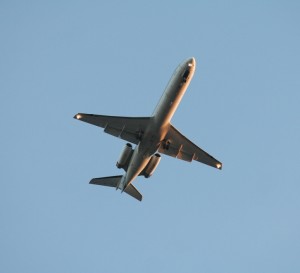 This incident happened in a time before I knew about the Law of Attraction. Norman Peel’s book ‘The Power of Positive Thought’ had been my mother’s constant companion for as long as I could remember. We grew up on a healthy diet of positive thinking. I wanted to go to England to see my parents. I wanted to go on that flight and so I ‘knew’ that it would be so. It wasn’t an option. It wasn’t up for discussion – I expected to go. I believed I would go and so my expectations were met.
Our expectation is an exact reflection of our belief of life. If you believe that your life is in such a muddle and it will never take-off – then this is the expectation that you have. You always get what you expect. It is not possible for you to get any more or any less that what you expect. Your expectation reflects your belief exactly. You can’t change your expectation – but you can change your belief! If you believe your life will never ‘take-off’ – then that is what you expect and you’ll stay grounded. If you believe you can take-off; then that you’ll get a seat, maybe even first class, and your life will take off.