What Do You Expect?

I’ve just got a cup of tea, so I thought I’d sit and discuss some philosophy with you.  And as is my bent, it is philosophy about the Law of Attraction.

My brother and I have the ability to talk fluently and entertainingly about absolutely nothing.  This is a skill that we continuously work on and practice a lot, always with much laughter.

One evening we were driving to attend a concert where my sister in law and niece where performing. It was a jolly journey with quick moving conversation that included talk of bikes, shoes and elves. It was fun and we laughed a lot.

When we walked into the concert hall, there was a raffle (there is always a raffle) – and the main prise was a lady’s bike.

Now my son is over enthusiastic about fitness and he often chides me gently, about not doing any.  When I saw the bike, I burst out laughing.  The Universe has a great sense of humour and I knew I would win the bike.  I bought a ticket and I just knew I would win that bike.  I had a great feeling of expectation.

However as the concert progressed, I began to doubt where I wanted it or not.  If I had it, it would give my son even more reason to nag me about exercise.  So my expectation of winning it began to wan.  However, I still knew I would win something.  I expected to win something.

The raffle draw came – I didn’t win the first prise of the bike.  But I was extremely interested in what I would win.

I just love the Universe.  It has such a great sense of humour!

I’ll have to tell you about how important Expectation is next time, as this blog is too long already! 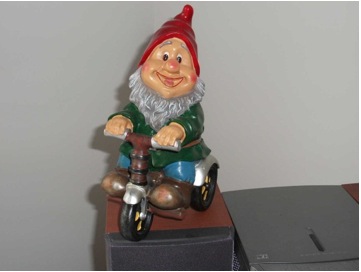