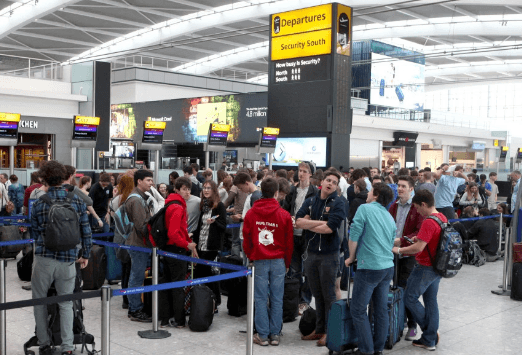 Los Angeles airport was packed. It was worse than a supermarket on Christmas Eve with people shuffling their trolleys between people and suitcases.
There were so many people with so many more suitcases: huge cases that were bulging at the seams and straining at their zips.

My daughter niftily navigated our trolley through the milling crowds down to the British Airways desk. She checked in for her flight. For complicated reasons I won’t go into at this time, I was not on the same flight as her, but I was booked on a flight four and half hours later.

As you can imagine, neither of us were happy about this situation.

I’d been checking with BA for some time for the availability of a seat on my daughter’s flight – but to no avail. 24 hours prior to departure, the control of a flight is handed over to the airport. So we got to the airport early so I could talk to the people on the ticketing desk about changing my flight.

I’d been positively thinking about getting on the earlier flight.  When I asked at the desk, I was told the flight was fully booked; in fact it was 28 overbooked.

Having worked for an airline, I knew that there were always ‘no-shows’- people who don’t turn up for flights. My daughter’s flight was to close at 3.10 – an hour before departure. I said I would be back at the desk at 3.10 and was given a ‘you’ll be lucky’ look!

My daughter was not happy about leaving her mother rattling around Los Angeles airport on her own!  Even though I’d traveled around the world, often on my own – she was not a happy girl. But needs must, and she had to go through all the airport controls, so she left me.

We’d dealt with the practical things: did I have my passport? Did I have enough US dollars? And we agreed that she

would wait by the boarding gate to see if I got on the flight.

I waited by the ticketing desk and listened to all the stories and hassles of other passengers as they tried to sort out all the problems with their tickets. And occasionally I caught the eye of the girl behind the desk who smiled and shook her head.

But I didn’t give thought to how I’d get on the flight when it was 28 overbooked: I didn’t ask how. I just knew – I believed in my heart that I was going on the same flight as my daughter.

The concourse emptied as the departure time grew closer and then there was only me at the ticketing desk. “What do you want” the lady asked, as if she didn’t know.

“I want to go on the same flight as my daughter – and I’d like an upgrade” (I threw the last part in as an after-thought).

She then typed and frowned at her computer, and tutted and frowned again, shaking her head, and then she gave me a boarding pass – saying “Ok, you’ll have to run – and I mean run – you’re cutting it very fine. Oh and by the way – you’ve got a very good seat”.

Against all odds – I’d done it again!

By the power of belief and knowing, I’d managed to reorganize the bookings of British Airways!

How’s that for power?

I love hearing from you , so please leave your thoughts and comments.  Thank you.