Law of Attraction – Bows and Arrow

I feel a certain contentment as I write to you this week. Contentment? No – it’s not contentment. I think it could be better described as ‘smugness’. 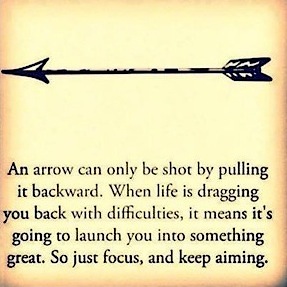 This picture was put on Facebook for me by one of my family and I think it holds one of the keys to conscious creation.

An arrow can only be shot by first being pulled backwards. It sometimes seems as if we take one step forward and two steps back – goodness me, I’ve done that dance so many times.

Sometimes it seems as if we’re just beginning to get somewhere and then the boulders come raining down and mountains appear out of nowhere.

To deal with every backward experience you need greater strength to pull back the string.

Every mountain we climb takes more effort and increases the tension on the string.

And so long as you hold your aim, focus on the target and keep your eye on where you’re going and don’t get side-tracked by the mountains – you created the mountains in the first place – when you let the arrow go, it can only go one place!

We can overcome the boulders and mountains if our emotions about our goal – the excitement, the feeling of freedom it will give us and the sense of victory – are more intense than our feelings of fear and anxiety.

The feelings of wanting to achieve your goal will give you the strength to pull back the arrow as far it needs to go, to send it flying through the air towards the target.

So, what has arrows, boulders and mountains got to do with my smugness?

During the first week of January 2014 I set a goal to write a blog for the site each week for six months. Sometimes I felt as if I was being dragged backwards. Sometimes the boulders and mountain seemed insurmountable. But I had made a commitment – not to you, you didn’t know it was my intention to write a weekly blog. It was my commitment to myself – and that is, somehow, more important.

And this is the last blog of my six months commitment. Looking back, I’ve broken my nails as I scrambled over boulders and sat on crying rocks as I climbed the mountains of not knowing what to write about – and the blog was due that day – but as time has gone one I have come to enjoy talking to you every week very much.

Somehow, it feels as if I know you better now and I really do enjoy your comments.

I placed the arrow in the bow, I drew back the string, and the string got tighter and tighter as I overcame the boulders and mountains and as a result it traveled fast, straight and true.

I’m smug because I’ve reached my goal. I’ve hit the bull’s eye and written a blog every week for six months.

Gentian is a lovely remedy. It is for disappointment, being discouraged or depressed as a result of suffering a setback. Very useful when having to scramble over boulders and climb unexpected mountains.