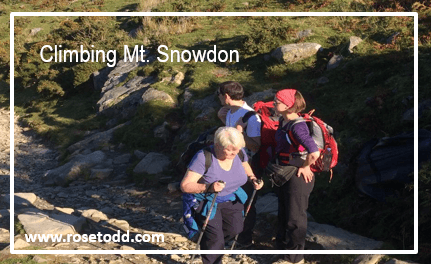 Morning dawned, crisp and bright, with a definite autumn chill. It was a calm and peaceful scene.  Ideally, it would have been lovely to stand, with a mug of tea warming my hands, absorbing the serenity.

However, there wasn’t time for such luxuries this morning.  This was a family weekend away and it’d been planned down to the last packet of crisps and bottle of wine! This morning, time was of the essence.

I had sometimes expressed a desire to climb Mount Snowdon and my family had organised this weekend so that we could do just that.  They had plotted and planned it and I had made some attempt to get fit.  And today was the day.  We were on a tight schedule as we wanted to get up and down the mountain by 6.30pm before the light started to fade.

Sandwiches made and packed. Tick!   Variety of snacks. Tick.  Plenty of water.  Tick.  Different layers of clothing, suitable for the ever-changing weather conditions of the mountain.  Tick.

And so we sallied forth – the family, filled with anticipation and enthusiasm and I, filled with dread and trepidation.  I was facing the unknown and I was not at all sure that I could climb any of the mountain, let alone get to the top!

To stop me going into panic I came up with a plan.  I decided that I would go as far as I could and then we would turn round and go down.   Phew!  The pressure to get to the top was lifted.

I’ve climbed only 3 mountains in my life:  Mount Inyangani in Zimbabwe when I was under 40!  Then at about 52 I climbed the Malvern Hills range in Worcestershire. Steps had been formed most of the way to the top of the range and then it plateaued out – relatively easy. Then, at the new retirement age, I climbed Dodd Wood in the Lake District that had a well-trodden path.

Nothing had prepared me

And now as a very ‘big’ birthday looms close, here am I, climbing Mt Snowdon. Nothing had prepared me for what I was about to face.  The path was made from rocks, huge rocks, some had been levelled and formed into rough steps (mostly of uneven size) and scree. And there was a constant stream, both ways, of people.

There was only one way to deal with this and that was with determination.  Head down. Focus on putting one foot in 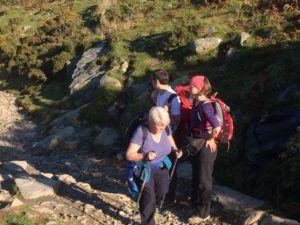 front of the other!  The family were very supportive and extremely encouraging. I didn’t have time to feel anxious any more.  The desire to get to the top was a thing of the past. There was only one thought in my mind – how and where was I going to take my next step!

There were 2 mantras running through my mind as I walked: the mantra of the Little Train:  “I think I can. I know I can”.  And some advice that my son passed on from Ranulph Fiennes  – “ just keep plodding”.

I didn’t get to the top

We stopped about two thirds of the way up for lunch. By this time, I was exhausted and had reached the end of my endurance.  I could not continue.  I was bitterly disappointed.  I felt as if I’d let the children down and myself too; for aren’t I the one that says ‘I can do anything I want to do’?

We  turned and began the long trek down. Going down was far more difficult and painful than going up.

Going down made me realised just how far I had climbed  – and I was content.

So where is the philosophy in this story?  What is the bottom line?

For me it was about having the courage to accept my own limitations and realising that the place I’d reached, was indeed,  ‘the top’ for me – and that it was a huge achievement.

As always I’d love to hear from you, so please leave your comments.  Thank you.