Success is a Mind Game 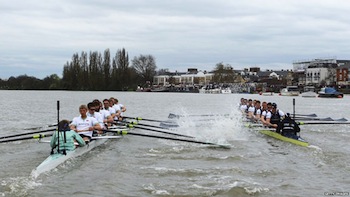 Saturday dawned grey, raining and windy. I’m sure it was almost blowing a gale.

I think April must have got its job description of ‘light April showers’ confused with March going out like a lion. April was in lion mode!
I rarely watch sport on TV. I’ll occasional watch rugby or some of the Grand Prix and usually some of Wimbledon – but I have to have some knitting or tapestry to do at the same time.

However, that said, I do enjoy the Oxford Cambridge Boat Race and watch it most years. Saturday was the Boat Race day and the weather wasn’t looking good.

But I’m a little ahead of myself, and so for those who don’t live in England or who don’t know much about the Boat Race, I’ll give you a little background.

The first Oxford Cambridge Universities Boat Race was in 1829. It’s raced over 4.2 miles on a tidal part of the Thames River in south-west London. The Boat Race is the focus of the fierce competition between the two great British universities. Much is at stake!

Fortunately the 9th April turned out in her beautiful best; sun shining and only a light breeze and the crowd that gather to watch this famous event, were dressed to ‘the nines’, sipping Pimms and Gin and Tonics, as is right for the occasion.

My daughter and I settled down on the sofa with tea and biscuits in time to watch some of the build-up to the race and then the race itself.

The coin was tossed and Cambridge chose to take the Surrey-side bends of the river leaving Oxford to deal with the more difficult and longer Middlesex bends. Within a very short time Oxford was in front and by the time they got to the Middlesex bend, they were far enough ahead to be able to move in front of Cambridge, thus manoeuvring themselves into the centre of the river so they could take full advantage of the tide.

Although Oxford were in front most of the time, it was still a very good and exciting race.

It takes intensive mental focus and enormous physical fitness to row at speed for the 20 minutes or so of the race. This was Oxford’s 10th consecutive win.

The commentator asked the rhetorical question ‘Is Cambridge going to be able to have the mental and the physical determination needed to win next year?’

I think it’s going to take some very dedicated, positive thinking to change that momentum in the minds of the Cambridge team, don’t you?

But what I really want to tell you is what the Captain of the Oxford team said in his victory interview.

He started out by saying that victory is a mind-set and that success is a mental game and that reaching the peak of fitness is part of the mind game.

The Captain also mentioned that the entire team, together and individually, had visualized going round the difficult Middlesex bend.

He also mentioned that they hadn’t visualised the outcome the race. Interesting!

And just to remind you – success is a mind game.

Part of the mind game is having a strong sense of self-worth.

My new one day workshop on 9th  May called “I CAN do it” stands on that platform.

If you want to release your ill-serving beliefs and develop of victory mind-set, check here for more information