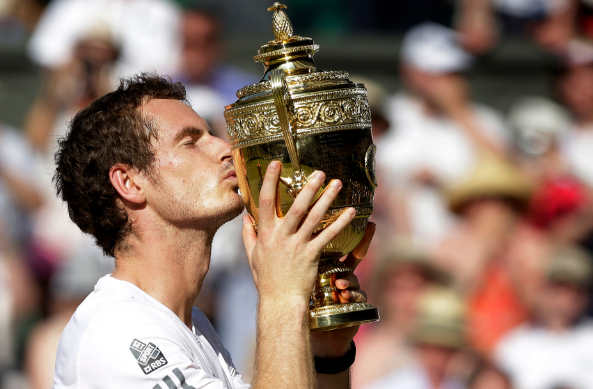 20 minutes ago, Andy Murray hit a shot that made him Wimbledon Men’s Champion for the second time.

The pressure was on for both players.  It was a tense game as the scores edged their way up the score board. First Andy winning one game, and then Milos Raonic, the other.   It was exciting and brilliant tennis.

If you missed it, you missed the greatest, inspiring, empowering and motivational seminar ever!

I loved the commentators and  I made some notes, so I could pass them on to you.  I’m sure you can just imagine me saying these things to you…

“You have to believe you can win – and back it up with the right action”.

Dream the dream, until it’s so intense that you believe it’s real: until you believe you can win, as well as picking up your racquet and getting your nose on the grind-stone.  Persistent practice is the key – always keeping your eye on the ball!

“Andy has such intense focus…”

There was a time in the game when the commentator said “he’s let the momentum slip” and here’s the bit I love best “the game is always won by momentum”.

Every time Andy sat down for his break, he opened his bag and read his game plan.  He was keeping his vision alive (often in the face of extreme pressure) and he was reminding himself of how he planned to get to where he wanted to go.

This is the same as you and I doing our visualisations and our affirmations – at ‘every break’!

There was talk about how Andy had lost the Australian Open five times …. “I love the way he deals with his losses.  He doesn’t give himself time to be disappointed.  He just moves on and focuses on the next game”.

“… and he’s always trying to be a better player”.

Maybe Andy Murray uses different words to describe his ‘Success Process’, but it’s still the same process I’ve given you.
So…

Do you check your ‘game plan’ as often as you can?
Do you hold your focus, making sure you’ve always ‘got your eye on the ball’?
Do you make sure you build and keep a positive momentum running?
Can you honestly say that you don’t allow disappointments through you off balance?
Are you always trying to become a better person?

Can you really believe that you can win your ‘Wimbledon’?

For Andy Murray to win Wimbledon, he had to go through the same process to get there as you do to achieve your goals.

You can do what Andy Murray has just done – achieved his goal – with the help of the 30 Day Diary that I wrote to help you keep your eye on the ball.