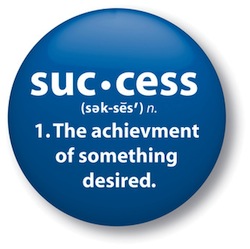 We all have our own idea about success.

The other day someone said to me “how can you be teaching this ‘stuff’ when you’re not successful yourself?”

I asked “How do you know I’m not successful?” They replied “You don’t have a big house and a big car.”

So, we now know their measure success – but it’s not mine.

Success comes in so many shapes and sizes and I’d like to tell you a very different success-story of one of my clients.

At the beginning of the year Jane called and asked the fee for a coaching session. She was on benefits and she had no money. We discussed this and she said she would sell ‘something’ and save and send me the fee – which she did within the month.

She had five children aged from 20 to a toddler and she and her husband are dependent on social benefits. She’s over forty and has never earned a salary – ever!

She wanted a job.

She is intuitive and has a love of angels. She wanted to be an angel card reader too – but had no money to pay for the study. So; top priority was a job!

Jane had left school with the minimum of qualifications but she knew what she wanted to do. She wanted to work in a care home. She found out all she needed to know from Social Services and applied for a job as a cleaner in a near-by Care Home. She worked out the bus routes and how her hours would fit in with school times.

I received a delighted text message a few weeks after Jane’s consultation saying she’d got her job and she absolutely loved it.

She loved working with the team of cleaners and carers in the home and she particularly loved the residents. I’m sure you can imagine her delight having earned her first salary! She was so proud of her achievement.

But, as we know, life happens and due to personality clashes (and Jane’s growth) she found a better job in another Care Home.

She saved what she could and we had a second consultation a few months later. Her focus had now changed. She got a job in another Care Home and she found someone to guide her through reading Angel Cards.

Over the months, she’s gone from strength to strength. She sold a drum-kit that no-on used anymore and attended an Angelic Workshop in London given by Doreen Virtue and she now confidently gives readings for her friends and family. Jane also does readings at local fairs and festivals.

However, there is more. Jane now has a new dream.

Her new intention to be able to help people live more positive lives, as she has done, and her next goal is to become Louise Hay Life Coach and she is now saving to attend this course.

This isn’t the usual type of success story but it is an amazing story of achievements and transformation.

I think it is an amazing story that shows us the power of intention and focus and that we can do everything we want to do.