How to Win Wimbledon!

Have you been watching Wimbledon? 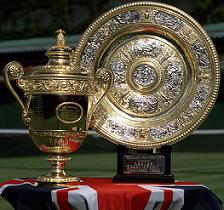 I have; on and off. It’s very addictive and once you get caught up in a game it’s difficult to leave. I think “I’ll watch the next set and then get on with work”. But that doesn’t seem to happen – I watch for another set and then to the end.

It’s now the second week and many of the players have fallen by the wayside. The process of finding this year’s champions is well underway.

This afternoon I was watching a Ladies match. They were playing for the place in the semi-finals. One of the girls was ‘alive’ and focused on every stroke. She bounced around the court always attempting to return the ball and mostly succeeding doing so.

The commentator remarked on how ‘flat’ the other girl was. It was as if she felt no aliveness; that she didn’t feel the excitement about playing on Centre Court for her place in the semi-final. Her services where lax and she didn’t attempt to run for some of the difficult returns.

The commentator asked the rhetorical question – “Where is her enthusiasm? It’s almost as if she gave up after the first set”. She also went on to say that “winning Wimbledon is a mind game not a tennis game”.

She’s right. Everything we do in life is a ‘mind game’. In fact, Life itself is a game we play with our minds.

So many people think that their minds run their lives. In fact for many, that is what happens. But we have control of our minds: we can choose what thoughts we think.

The girl lost the match (yes she did loose) because her heart was no longer in it. She believed she could not retrieve her position and win the coming sets – and yet others have done so in similar circumstances.

You and your mind play the game of life every second. You can choose what you want to think.

If you find yourself feeling a little negative, change your thoughts. Get yourself back into the game. Pull yourself back from the brink of building a momentum that is sure to create an experience you don’t want.

You can hypothetically, win Wimbledon – every day!