Today is blog day. Today is also the beginning of a new month and I’ve turned all the calendars and said “white rabbits” as I was taught as a child; but I’m going to give the “pinch and a punch for the first of the month” a miss.

The 1st of April is commonly known as April Fools Day. It’s the day of practical jokes – so take care. I am not a fan of practical jokes, so I’m going to put that aside too, in favour of something which I think is more interesting and can bring us hope instead of humiliation.

Being thought a ‘fool’ is humiliating and degrading. It generally indicates that you either have no intelligence or if you do – you’re not using it.  ‘Fools rush in where angels fear to tread’ the saying goes. And, apparently only ‘fools fall in love’.  Now – there’s an idea. Doesn’t the idea of falling in love feel seem better than humiliation? I think so – and I’m all for reaching for better feeling thoughts.

And I have another idea.  Let’s look at the archetypal energy of the Fool in the Tarot and see how it can relate that energy to us and the Law of Attraction – or as I prefer to call it consciously creating your life: Conscious Creation. 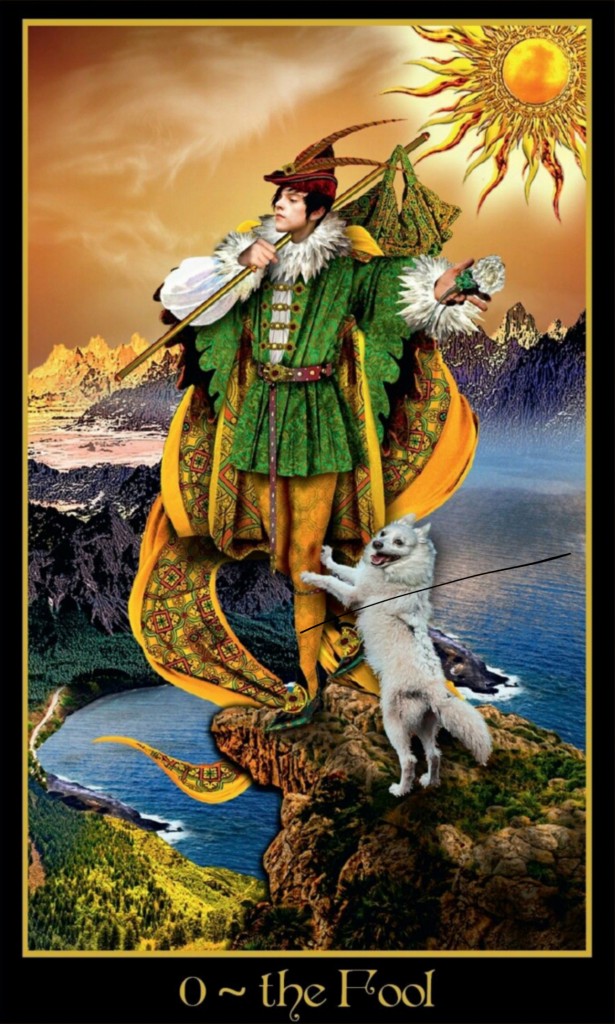 The archetypal energy carried by The Fool is one of new beginnings and unexpected   influences where important choices and decisions have to be made.  Spring is still bursting  out all over and now the year is beginning each day anew.

I would now like to introduce another player – well, lots of other players really – the action of some of the planets.   I don’t know anything about astrology, but I do know that little moon of ours hurls every drop of water on this planet back and forth every 12 hours. And as we are 71% water, it has got influence us.

So it follows that the movement of the planets will have an influence over us too.

I follow the work of the astrologer Jonathan Cainer and I quote:

“Back in 2012, a series of seven right angles between Uranus and Pluto began. They continue until 2015. Each triggers an awakening to the existence of new possibility. April brings the fifth in this sequence. It is particularly powerful because it meets a further right angle (or square) between Mars and Jupiter, creating a Grand Cross in the four ‘Cardinal’ signs of the zodiac”.

The Grand Cross brings opportunities and potential.  The spring brings renewed growth and enthusiasm. The Fool reinforces the new beginnings of spring with ‘unexpected influences’.  Oh, I wonder what miracles will occur. And now add an awakening to the existence of potential possibilities as well as bringing new opportunities.  What a wonderful mix.

It all sounds good to me – and so much better than humiliation and a ‘pinch and a punch’.

Use the magic of the beginning of this month: make conscious choices: decide what you want – and most importantly why you want it. Remember the feelings – and start creating! Use the most powerful tool of creation – your imagination.

Let me know what miracles come to you during April. I do like hearing from you.

For those of you living in Herts/Beds/Bucks, or like travelling;  I’m exhibiting at the Mind Body Soul Event in Flitwick on 12th – 13th April and talking about the Soul Connection on both days; Saturday at 3pm and Sunday at 12 noon. Come along and say hello.