Marianne Williamson. Its all about you!

I’m a very good Boy Scout.  I like to be fully prepared and if I’m not too sure of what or where I’m going, I always make sure I have plenty of time. If I’m travelling, it might involve taking an earlier train, or leaving half an hour before necessary.  Always build ‘cushion time’ into my plans. 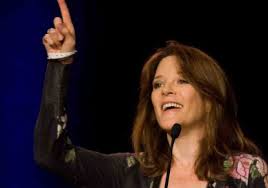 I had booked to attend a Marianne Williamson workshop in London: Living the Miraculous Life (who doesn’t want to live that?).  I had looked at the venue – an auditorium in one of the London Universities – that holds 930 people!  You don’t hire that kind of venue, if you don’t expect that number of people.

So I phoned the organisers and found out that 550 people were booked and they expected another 50 or so sales on the door and what time the doors opened.  Having worked for an airline, I know how difficult it is to manage that number of people efficiently!  Getting 600 people ‘organised’ takes time!

And I want a ‘good’ seat.  I’d heard Marianne talk in Dubai about 15 years ago and had heard her in London a few years ago.  She is one of the best speakers I have ever heard.  I wanted to be sit in the ‘right’ place so I could see the stage and write notes (without having to wear my glasses).  And, being short, not having to look over too many heads in front of me is important too.

So off I go – feeling very excited – on an early train.  I got to the venue before the organisers and so I did the obvious thing – went looking for the coffee shop! I was first in the queue and I sat on the stairs and waited.

Soon I was joined by another good ‘Boy Scout’ who sat with me on my stair.  We started chatting and found that our philosophy and ideas about life were so similar, it was incredible.  This is the law of attraction in action – at its best!  Do I hear you say, that it’s not surprising that this woman had similar thoughts to me as we were at the same workshop?  Yes, that is a thought, but not everyone is on the same frequency.  This was fine tuning.

My friend of Hertfordshire arrived and we went into the auditorium and sat, in what I considered, the best seats in the house!

Marianne Williamson came on the stage to a huge thunder of applause – and she was off.

She talks very fluently and very fast!  I started to make notes but ended up with 2 or 3 pages of half written sentences that didn’t make sense.  So I stopped writing and listened.  The ‘good stuff’ just kept coming, flowing naturally from her, all day.  She lives and breathes her philosophy so completely in every moment.

There is one thing I I can take away from the workshop – and if we were to live by it, we’d have different lives.

It’s not about them – it’s about you.

It’s not about getting – it’s about being.

It’s not about ambition – it’s about inspiration.

I’m holding a Law of attraction Booster Afternoon on 4th July to give you a shot of motivation and a zap of positivity.

There are still seats available.  But the Early Bird discount expires on 29th June.  So don’t delay.